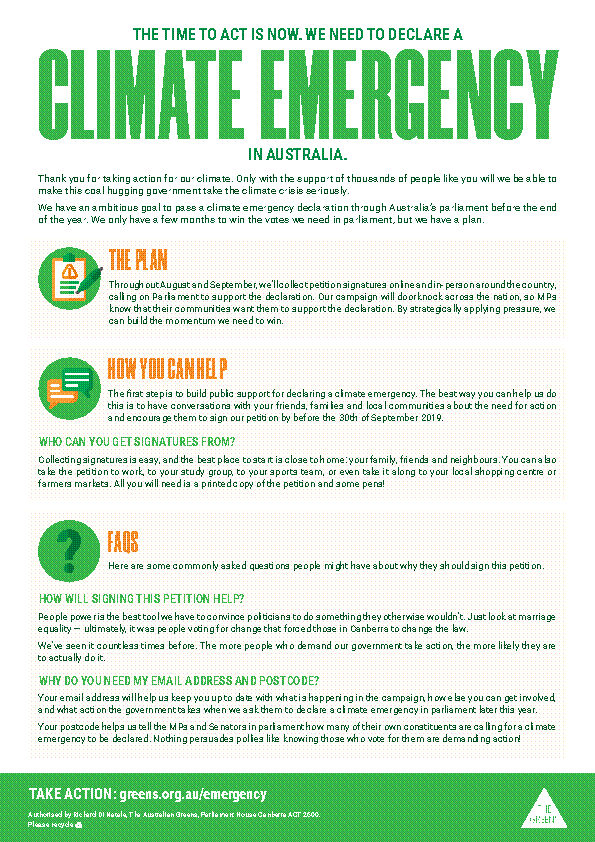 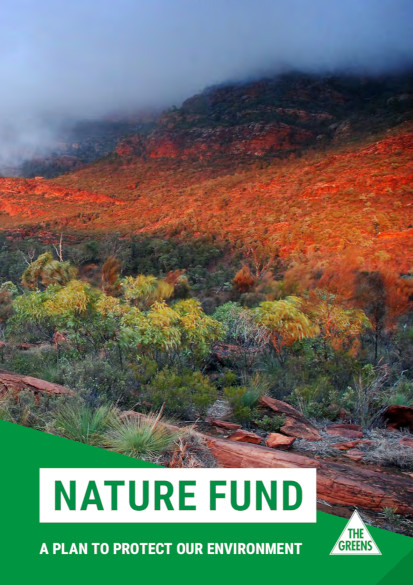 Jobs and funding for Nature 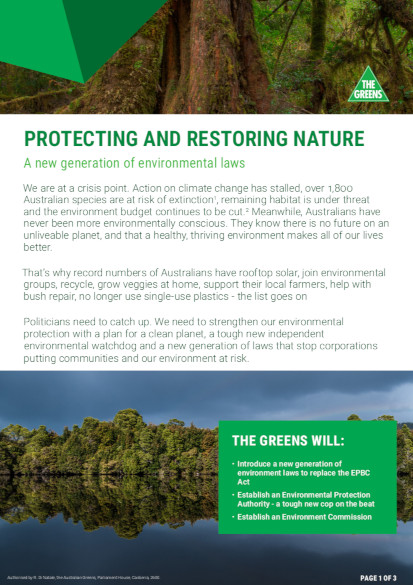 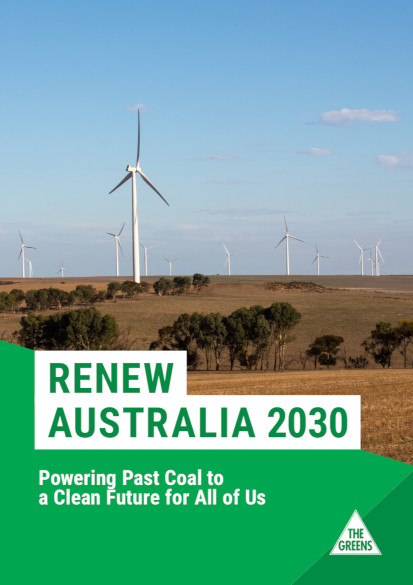 Greens plan for a renewable economy 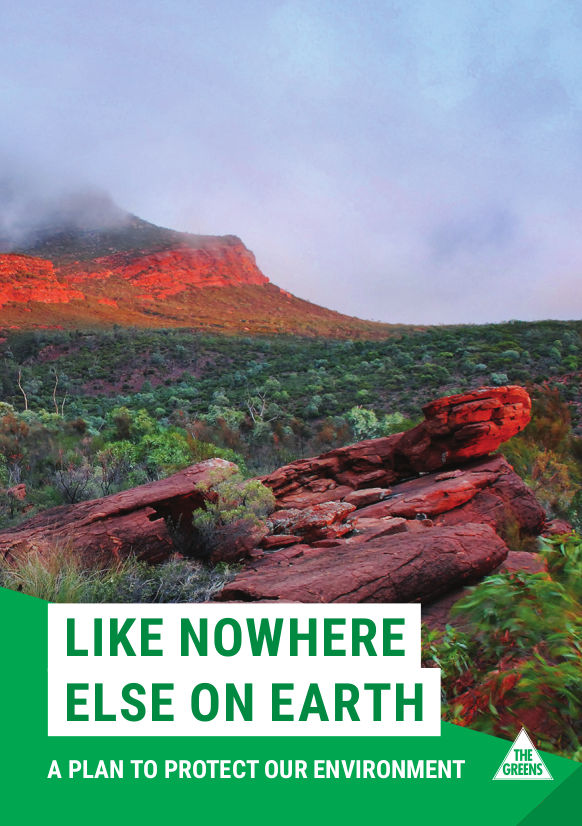 There isn't affordable housing in the Parramatta Local Government Area
There is no provision for it in Parramatta Council Planning.
This leads to very high rentals, unaffordable for people in ordinary occupations.

Get active in the Sydney Campaign.

Australian Politicians cannot say no to new gas fracking and new coal projects, while large numbers of Australian people are saying no to them. The obvious conflicts of interest between people and government are here now.

Only the advanced corruption of government riddled with cancerous cash for exploitation, is capable of going against the plain simple scientific obviously truth. Australian government politicians are not genuine people-representative politicians, they are running wholesale shopping outlets for mining corporations, with the staff on the cash registers being seduced as the future employees of the mining corporations. This is an illegal and immoral government, with its head in the greenhouse gas fumes.

Here’s how climate change is already killing us New Daily

Climate change is already killing us and will continue to cause more deaths in Australia if we don’t mitigate the growing emergency, the Australian Medical Association has warned.

Raising Newstart would lift people and the economy Here

The Parramatta Greens wholeheartedly support ACOSS in its call for an urgent $75/wk increase in Newstart from an abysmal $277/wk or $282/wk with the Energy Supplement. This is now nearly 40% below the poverty line. Along with an increase in related allowances, data analysis by Deloitte for the City of Parramatta LGA has estimated that these benefit increases would give a local spending boost of at least $23.5 million each year.

There is something particularly wrong with the NSW "Independent Planning Commision" - IPC , if they really need to be asked to reflect the latest climate science, when assessing cases for new coal and gas mining, in the context of everyone on this planet having a desperate need to rapidly cut all global carbon emissions. If they are truely independent, why do they need to be asked?

The NSW Greens know where the climate science is at, as they have repeatedly asked the NSW government to act as if climate change is real, while Australia continues to export it to the world. The Greens  have asked NSW government should update the terms of reference to the IPC to take this into account. After all, a recent Environment Justice Court Case specifically cited "climate change considerations", as a good reason to reject a new mine. So should the IPC.

the Rocky Hill coal mine would increase global greenhouse gas emissions "at a time when what is now urgently needed ... is a rapid and deep decrease in GHG emission.   --- Justice Brian Preston


Heat is Australia’s number one natural killer. During a heatwave hospitalisations surge, power bills skyrocket, infrastructure breaks down, and traffic worsens. This all-encompassing issue requires an all-of-government approach which is why heat should be a Premier’s Priority following the 2019 NSW Election.

Heat is a particular issue for Western Sydney, where temperatures can be more than 10 degrees hotter than the CBD, and energy usage for cooling 100 per cent higher. In December 2018, WSROC released its Turn Down the Heat Strategy; the first multi-sector approach to heat mitigation in Western Sydney. However, heat impacts all communities and we see a clear role for the NSW Government to champion this multi-faceted issue across NSW as a whole.
Making heat a NSW Premier’s Priority would give all government agencies a clear mandate to tackle the impacts of heat in their own domain, whether this be health, transport, energy, infrastructure or planning. It would also ensure a coordinated approach to this far-reaching challenge.

Summer is always going to be hot in Australia, however there are things we can do to mitigate heat and reduce its impact on our communities.
WSROC’s strategy outlines potential for better collaboration, cooling through greenspace and water, heat-mitigating urban design, more resilient infrastructure, and ensuring communities have the knowledge to protect themselves and others from heat stress.
We must look at building codes that enforce heat-resilient design and reduce the need for air-conditioning; reducing both household power bills and pressure on our energy grid. This might include increased requirements for greenspace, tree cover and cool materials, as well as tapping the natural cooling power of water and wind.

Reviewing the capacity of our infrastructure such as roads, rail and energy to cope with extreme heat is also critical. We must ensure that these services are available when communities need them most.

Empowering communities to take local action is key. Australians have a wonderful ability to lend a hand during times of bushfire or storms, however heat is often referred to as the ‘silent killer’ because its impacts can’t be seen. Heat resilience includes ensuring our communities know how to keep themselves safe and check in on neighbours and loved ones who may need help.

Most importantly, we must work collaboratively to ensure efficient and effective use of resources. Together we can build a cooler, more resilient future.

A copy of WSROC’s Turn Down the Heat Strategy is available here.

No solutions in sight, for extreme costs of living in Sydney.  Although Sydney's average house price fell by 9.7 percent, and rental costs have dropped just a tiny bit, they are still unaffordable for people on average incomes. Despite election promises of targeted measures to some limited categories of people, there is not much discussion on the causes - due to growth overshoot and overdevelopment of size and scale.  Sydney is stuffed, with over-extended suburbs, population pressure, public transport struggling to provide services, and rising utility costs of energy, water and transport, while wage growth is non-existent.

Meanwhile the government still allows coal mining under Sydney water catchment areas, which leads to a permanent reduction in their "water catching" abilities. Growing extreme heat every summer is making everyone a little crosser, especially in the outer west. Sydney's "cost of living" isn't only what we pay, but also what we add to our global heating predicament.  Global heating is getting worse, and the NSW government is still stuck in maintaining our overall fossil fuel energy dependence, pushing harmful coal and coal seam gas mining, and the NSW fleet of aging, failing gas and coal power stations.

"The heat particularly affects thermal electricity generation because the efficiency of thermal generation depends on temperature extremes between input and output."

Sydney's expensive water desalination plant has been switched on for the first time in seven years, because of ongoing heat, drought and falling water levels in Sydney dams. At peak output it will supply about 15% of Sydney's drinking water requirements, and add about $30.00 your annual water bills.

The end result of all these trends, is a growing squeeze on the health and well being of those that choose to stay in Sydney. Sydney still ranks high in "quality of living" in global city rankings, but only while you can afford it. 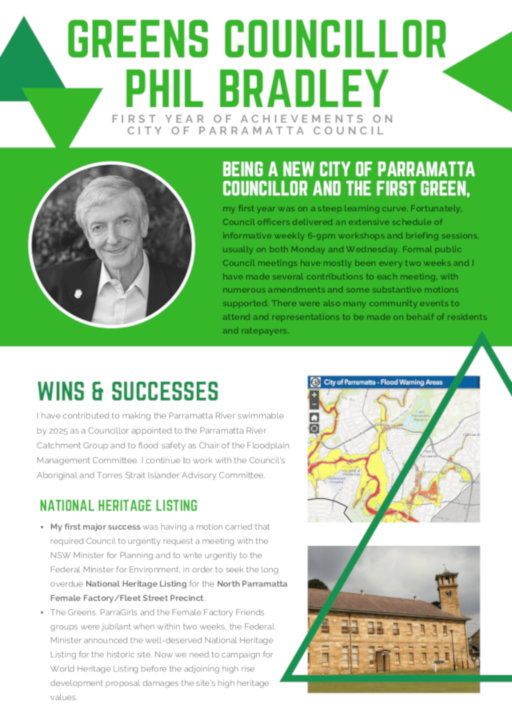 It is unacceptable to have wealthy property development companies able to override the public plans of the Parramatta community by offering to give the Council money.
Allowing wealthy developers to override our planning regulations while requiring the rest of the community to abide by them is discriminatory and undemocratic.
However where Parramatta Council continues to allow this undemocratic process, the Parramatta Greens will continue to insist that the community receives fair value for the increased profits that result in the developments exceeding the planning regulations. 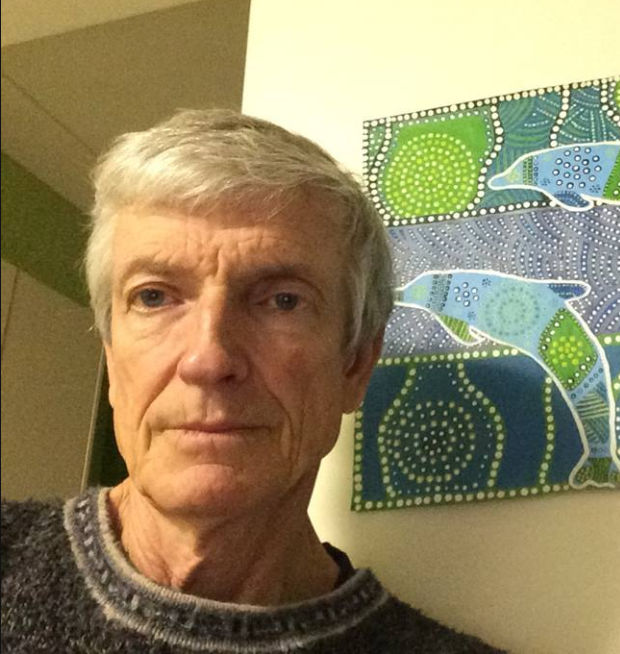 Now that we new City of Parramatta councillors have just completed our schedule of informative induction workshops and completed our first ordinary Council meeting, I have been able to reflect on our hectic first month on the job.

First, I would like to thank all who exercised their democratic right to vote for their council representatives, including for me as the first Greens councillor for Parramatta.

This opportunity was welcome after being denied the right to vote in 2016 as a result of our council amalgamation with a government appointed administrator.

.. more
Parramatta's future must not be a high rise nightmare Here

The Greens have demanded an immediate rethink on the scale and density of high rise development in Parramatta's CBD when a new council forms after the 9th September 2017 council election. 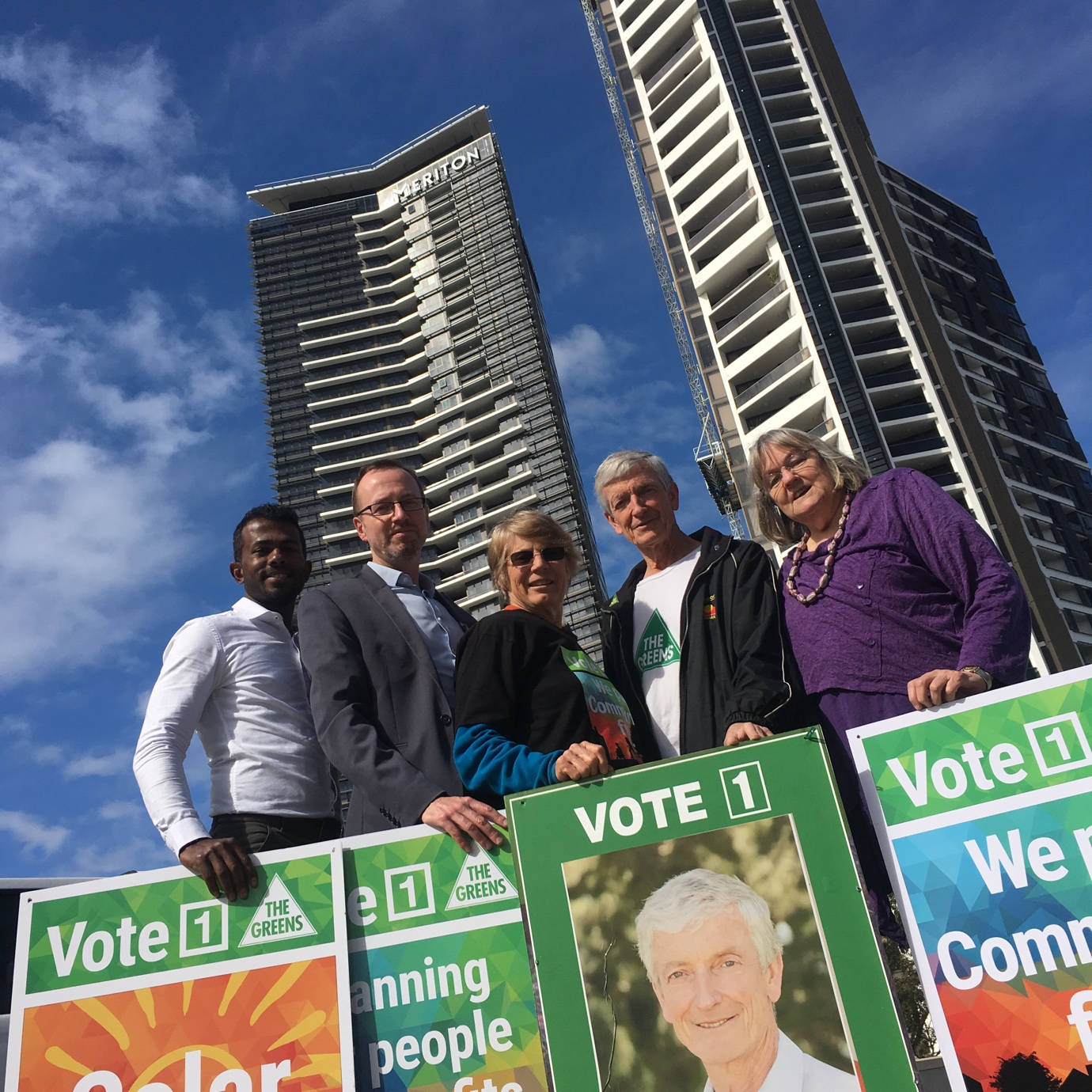 The Parramatta Greens today launched a new plan that will free up local rental accommodation and raise more than $5.0 million per year for the City of Parramatta Council to spend on community housing. The most recent Census data shows more than 5,450 homes in Parramatta are unoccupied. That’s almost 7% of properties, and it’s a troubling figures given the current housing crisis. The Greens’ Empty Homes Levy would enable Parramatta City Council to charge an additional levy on the owners of untenanted investment properties, with the revenue being invested in local housing projects. There is huge need for affordable housing in Parramatta, where the median price for houses is $675,000 and for units $609,000. No wonder that homelessness is increasing.

The conflict between unsustainable, dirty-coal energy and our present global warming emergency is exemplified by the Adani Coal Project, and other multiple coal mine planned for the Galilee Basin in Queensland. The Australian Labor Party has understandable leniency towards coal interests. Unions want mining jobs, and state Governments want mining revenue.  Many more people want a future, and need this planet to be livable.  The more our planet warms the less livable it is.  The death of the entire great barrier reef is only one step further. The Greens oppose new Coal mining projects outright, and will be knocking on doors in electorates to hurt Labor where it matters.

'If something cannot go on forever it will stop' - Herbert Stein

The Greens today announced the first two of their candidates for Parramatta Council. Phil Bradley and Lindsay Peters.

.. more
Westmead Hospital could lose up to $650 million in federal funding over the next decade Here
The Greens candidate for Parramatta, Phil Bradley today said "The Parramatta Greens condemn the changes made to Federal-State funding arrangements in the 2014 Federal Coalition’s budget, which saw $57 billion axed from local hospitals over the next decade. The Turnbull government’s recent budget restored only $2.9 billion of these cuts. Based on this, figures provided by the Parliamentary Budget Office and hospital bed figures provided by the Australian Institute of Health and Welfare, an estimate has been made that Westmead Hospital could lose up to $650 million over the next decade.
.. more
Climate Emergency Petition Here

Here is a link to the Australian climate emergency petition, both online, and paper versions, for which many people are trying to gather as many signatures as possible. We need Australians to tell governments to treat climate change for the emergency that it is, and has been for some decades. 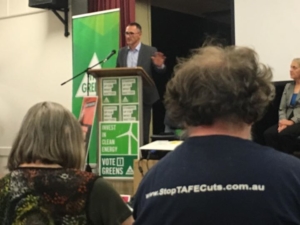 Organised by Parramatta Greens, and Co-Hosted by The Refugee Action Coalition and People Just Like Us.

Parramatta Greens today (8th May 2016) urged the old Parties to end their cruel treatment of asylum seekers and refugees.